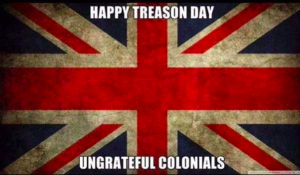 Granted England is somewhere about the size of Manhattan, give or take a few blocks, it is imperative that we former colonists show some interest in Dear old Blighty. Given that the current presidential race scares the drawers off of almost all of Europe, we necessarily look towards our former owner with some desire to learn how things are going on the island.

Although many have shown disinterest in the struggles of the U.K. without a continent full of colonies, we former colonists can show our colors, Red White and Blue, match that of the Union Jack. Why even our songs have similar melodies, albeit with some very different words.

One way that we can show our appreciation for the old homelands is by watching Prime Ministers Questions. Watching those gives a good feel for the parliamentarian form of government. Can you imagine our president down in the well taking the questions from Congress? Why not you say? A rowdy good spectacle you say?

If we are looking to find a place to head to if Trump is president, not saying he could be, but. .. Anyway. Knowing some of the rules necessary to be in Parliament is a good idea for politically active folks. First up, you really do need to be a citizen of Jolly Old England. As Americans, the Brits do not accept our offer that we were former colonists. They still hold a grudge about the late 1700’s. Next is we took over the place during WWII and that is still one of those things hanging around too. Post WWII a great many of us returned with more greenbacks.

But, it is important to remember we picked up a bit of anti-British way of holding our forks. Be careful to use your fork the British way when back and looking about for a new home.

What-me has been online continuously since June 1994. View all posts by admin